Well since Specialist Matt Trakker of the Mobile Armored Strike Kommand (M.A.S.K.) was made a part of G.I. Joe back with the Real American Hero's Twenty-Fifth Anniversary line.
http://www.yojoe.com/reviews/figures/wa ... kker.shtml

interesting. hope its in the same universe as GI JOE, will say that Rising Sun Comics did this back during the world war III Interludes series
Top

hahaha, been here just dont post much, and now with the forums updated I get email notifications which causes me to come here more often !
Top

Good! Good to see you!

jamarmiller wrote:interesting. hope its in the same universe as GI JOE, will say that Rising Sun Comics did this back during the world war III Interludes series

That's probably not going to happen sadly. The only Joe books IDW is publishing at the moment are the Larry Hama continuation of A Real American Hero, written by the Godfather of G.I. Joe himself. And G.I. Joe Vs. Transformers which will be wrapping up its run with issue thirteen. Although Hama's Joe book has included cyborg ninjas, and Jaeger sized robots of alien origin in the current run, M.A.S.K. may not be that far out there putting in an appearance in ARAH. Although, I'm hoping if IDW can get their take on Joe out of limbo they got it stuck in, we could also see them show up there as well. The group did get a shout out in TRANSFORMERS PRIME:Beast Huneters in the episode "Project Predacon". An experimental, prototype vehicle , courtesy of the military's M.A.S.K. division, was scanned by Optimus as his new vehicular mode.
Also 2011, as part of the New York Comic Convention(NYCC) ,Hasbro released UNIT-E(http://news.toyark.com/2011/10/17/unit- ... sue-0-4908), which had the various Hasbro brands under one roof. Including M.A.S.K., which had a bit of a different take on property. 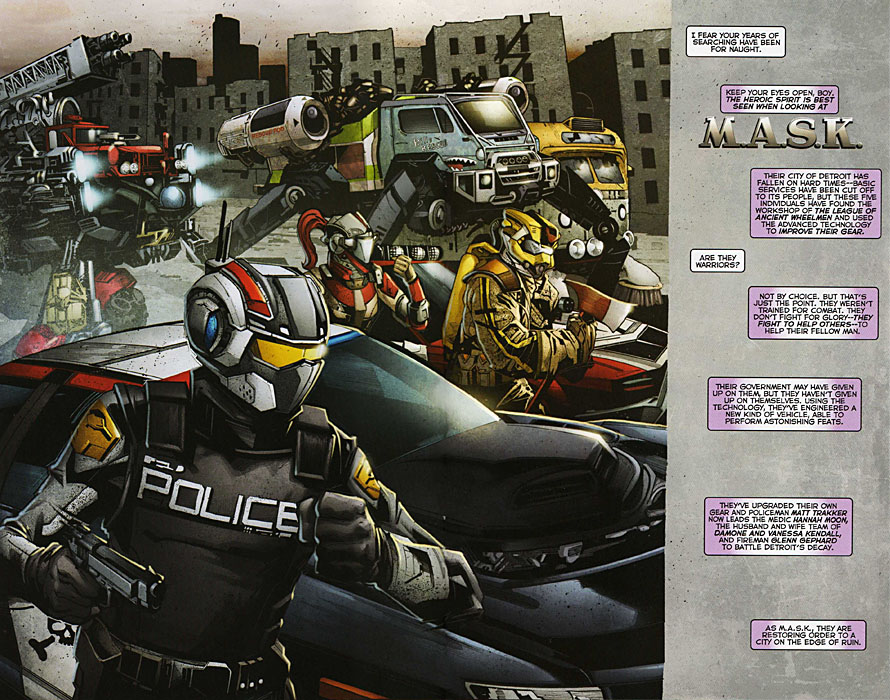 Then there seems to be a possibility M.A.S.K. will be getting the big screen, live action treatment in the not so far future. With Hasbro and Paramount developing a Hasbro Cinematic Universe with a writer's room heading up by Akiva Goldsman. Under the Allspark Pictures banner. I hope MASK will be the same characters we grew up with rather than ones we aren't going to invest any interest in. What I do want to see though is Scott Trakker to be realistically aged not another perennial teenager and for T-Bob's comedy routine to be toned down.
Spock, where the hell's the power you promised?

can GI JOE Crossovers be far behind ?
Top

It'd be nice to see some toys too. MASK hit at the end of my childhood so it doesn't have the same appeal as VAM and AF, but still cool none the less.
Let me tell you, Gunner La-De-Dah Graham, the British Army can fight anything! Intimate or not!
Top
Post Reply
27 posts